My Truck and the Happenings of Tulsa

Just like the others, this is super late… Like, I’m talk’n this should have been posted late may and its November. Anyways. So I broke the news to my boss the work day before I got my offer (may 15) that I was expecting an offer from another company. Naturally, he asked which so I filled him in.

so from this point forward, I’m updating from november, somehow, this post got semi-saved from july and I never finished it. Woops. Long story short, boss wasn’t terribly happy. The next day at work, he told me that they weren’t interested in investing any more time in me since I wouldn’t be staying with them for the long term. Fair I guess, but a bit of a bummer. I was hoping to spend another ~2.5 months with them since I was helping build out and test several systems. I really only told them I had another offer and I would be accepting it because I was taking the place of a super expensive and pretty rare contractor. I made my way round after gathering and handing off all my documentation, to say bye to everyone. Talked to most people that had a big hand in my time there, but some people weren’t there that day. as far as I can tell, I left on good terms. (even got to talk to the cio! )

Since this is yet another old/reflection post i’ll just cut to the chase. This was a bit of a rough few days. All in that short time I got an offer from Google, became single after ~5 yr, got ‘let go’ from current job and my truck decided it needed a new engine.

The engine decided to give out when I was out driving around Tulsa. Was driving on the highway when it stuttered and stalled out. Luckily I was headed to visit a good friend and her dad and brother were able to come by and tow me to their town from the highway. 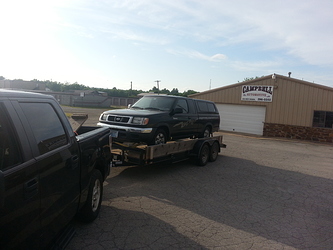 We took it over to a local shop owned by a friend of theirs to take a look. Sounds like one of the bearings seized up. Once the truck cools down completely, the truck will run, for a few seconds till things start to warm up and lock up. Might have been caused by a faulty oil pump? My light did flash for a bit but would turn off pretty quickly. Ahwell. We towed it back home and there it now sits. Alone and waiting for a new engine.. So ended my rather eventful week in Tulsa. Lost my truck and lost my job. could be worse right?