Several weeks ago I made a couple questionable craigslist purchases. I ended up with a Viair 380c. Along in the deal I somehow also picked up a 37” Grover air horn and a tank that looks suspiciously like a ~4gal version of the 2.5gal Viair.

by the way, this is crossposted on ExPo Forums 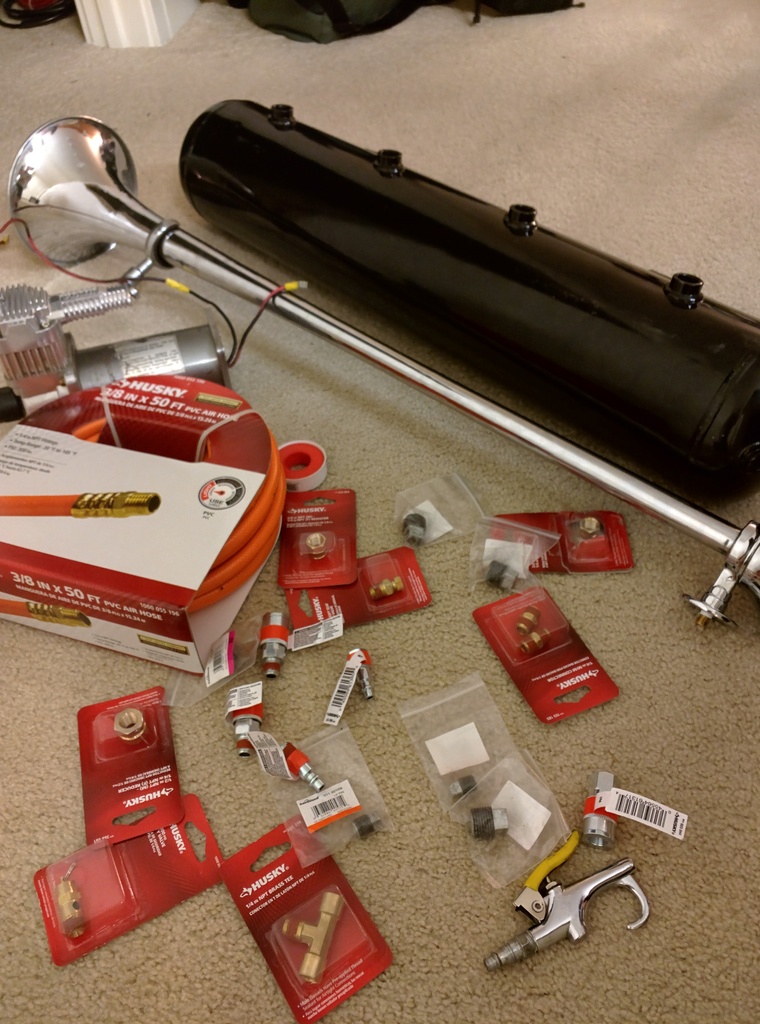 Just about everyone on here has their own special way of mounting and controlling their on board air. I opted to try and keep it relatively simple. For the time being, I’ll have it always on and tied simply to 12v ‘acc’ and a viair pressure switch. Since the compressor is rated to 200 psi and the tank is totally unknown, I opted to keep it relatively conservative with a top out of 150psi and a pressure relief at 175psi; I expect the tank could do more, but why push the luck ehh?

For mounting, just about everyone I’ve seen has found some clever way to hide it away in the engine bay. Now this does have two fantastic benefits of: 1. keeping the air intake clean; and 2. keeping the power run nice and short. I could not, unfortunately, find a good way to do the same. Instead, I decided to mount it to the frame rail just ahead of the airdog lift pump from the previous posts. 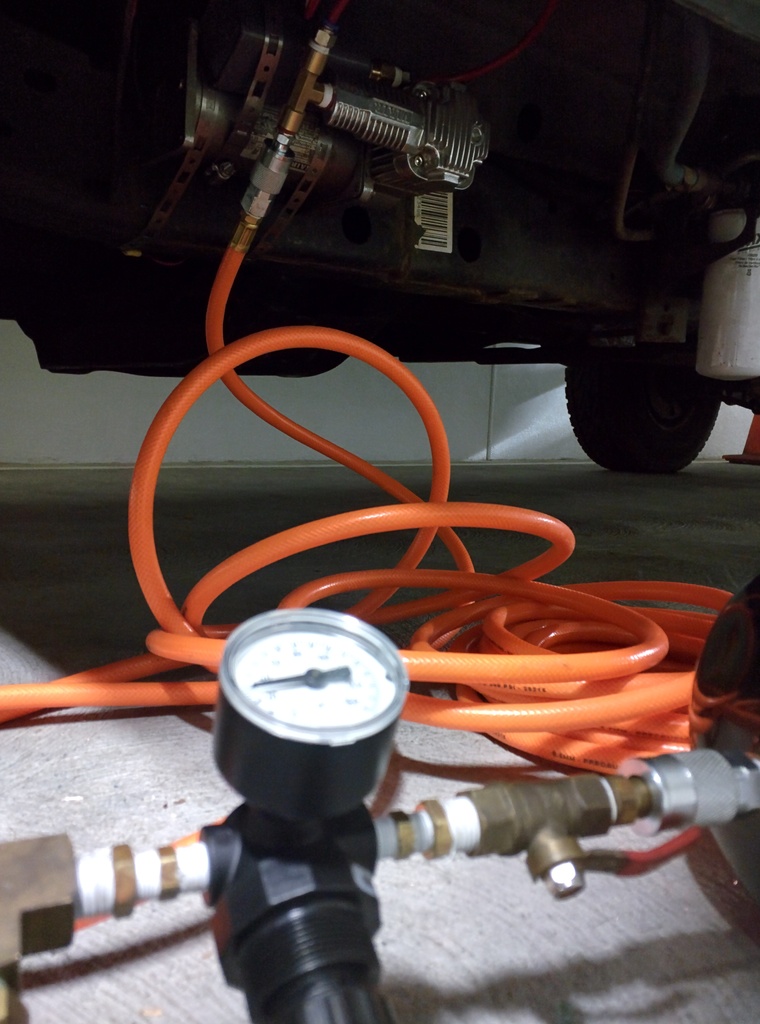 I’m away from the shop (1,700 miles away ) so I don’t have any clean way to make a nice proper mount for it. I found some pretty fantastic metal bands available (yet again) on amazon. I would HIGHLY recommend anyone to pick up one of these for emergencies. Essentially, you decide about how long of a metal band you need, and lop it off of the spool. Then, affix the ends and voila, you have a super strong, adjustable, steel band clamp you can use for mounting things, affixing things, or reattaching that semi-important radiator hose. I was a bit concerned about them holding (I used two) but after 2 weeks of daily driving, they have yet to loosen up at all. 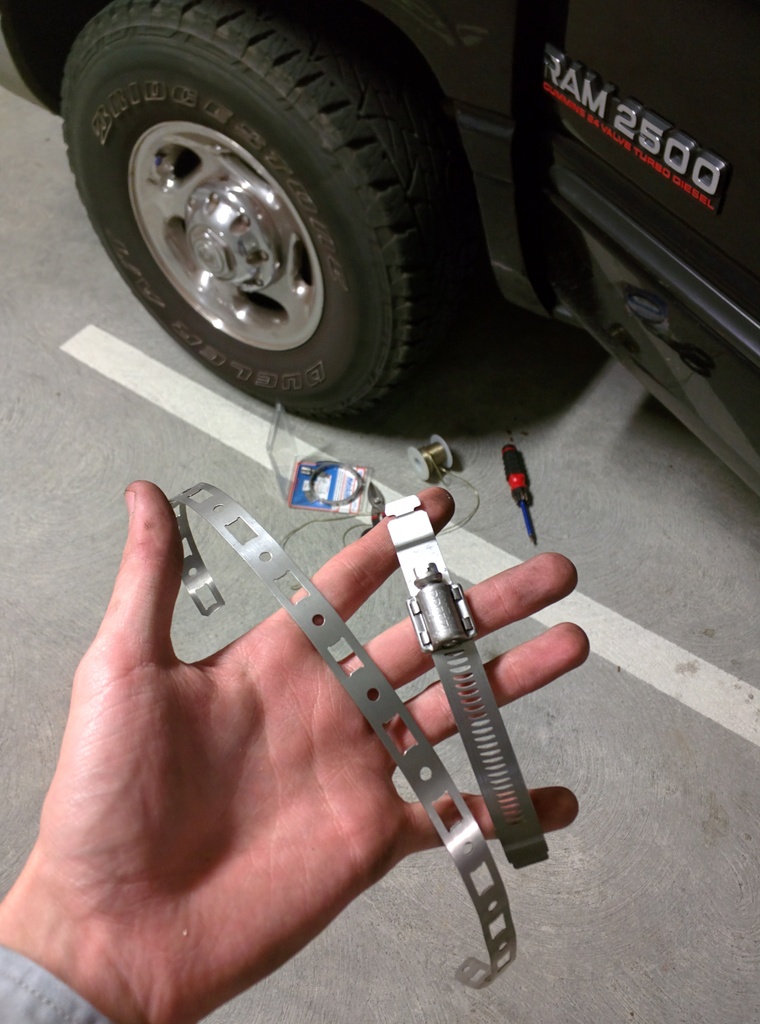 Once mounted, I added the electrical with some (apparently spotty) 8awg wire and a 100amp thermal breaker. I picked up the 8awg from amazon and some fantastic ring connectors from O’Reillys to simply wire it in to the ‘main’ battery terminal. - - I am taking suggestions on how to clean this up.. it works, but its not the prettiest thing in the world. 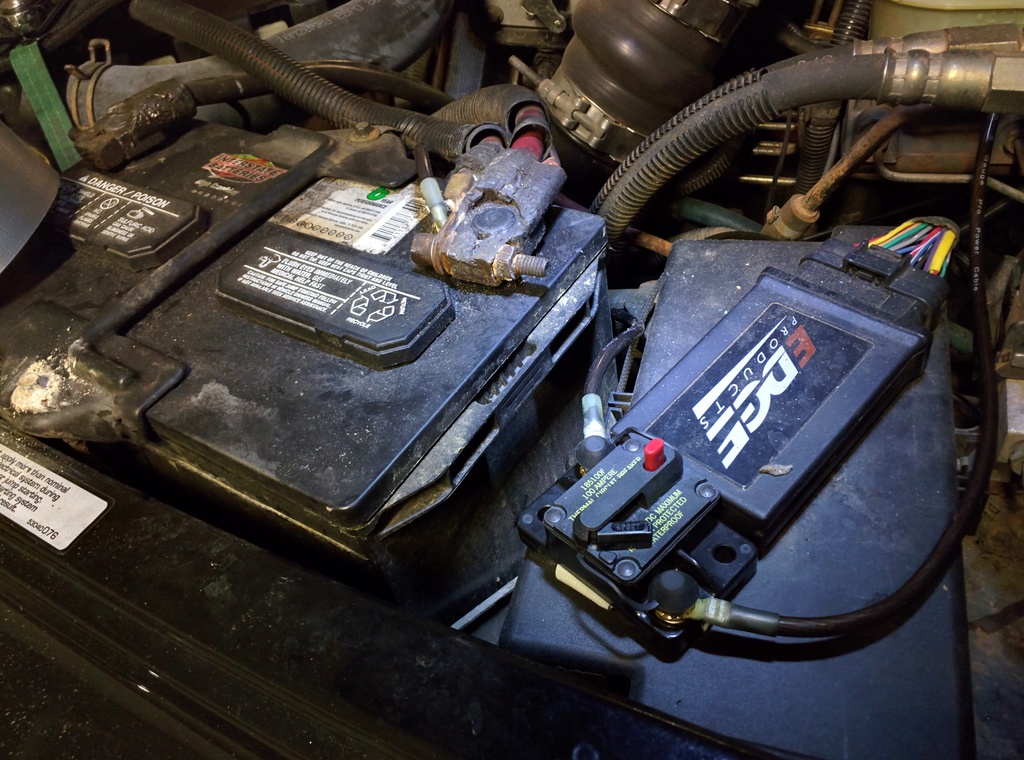 All said and done and it sorta works. It does fire up, but it seems that either the 8awg isn’t quite as good as it is supposed to be for the run (<5ft) or the relay can’t actually handle ~40amp or some of my connectors are sub-par since the pump looses all of its spunk and lags really hard. Haven’t had the time yet to sufficiently diagnose but I’ll probably end up swapping out the cables for some 4awg stripped jumper cables or something. Something for the next post I suppose!

The tank’s final location is still tbd since I’m not sure where I can tuck it up in to and keep it out of the way. The Air horns, I expect I’ll be mounting next weekend. 37” of a horn is a quite a bit of chrome to go hiding places, so the best place I’ve found is next to the frame rail on the passenger’s side. We’ll see I suppose; I’m thinking it will be put to pretty good use.